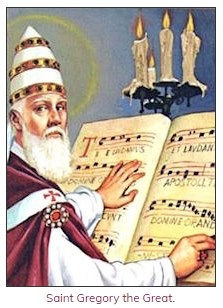 Gregory was born in the year 540. He was the son of a wealthy Roman senator. His mother was St. Silvia. Gregory's father sent him to the best teachers. He was always humble.

Gregory was prefect of Rome for one year. Then he sold all his property and used money to build six monasteries in Sicily and one in Rome, where he went to live as a monk. He continued his kind deeds to help the needy.

One day he saw some slave children being offered for sale near the Roman Forum. On being told they were Angles from England, Gregory replied, "Not Angles, but Angels shall they be. The true faith must be brought to them".

Obtaining permission from the Pope, he began his journey as a missionary to England. The people of Rome later asked the Pope to recall him. After Gregory was elected Pope, he sent St. Augustine and a company of monks to England in 597. He also sent missionaries to France, Spain and Africa.

Pope Gregory is called Doctor of the Church because of the many books he wrote, especially on the liturgy of the mass and the office. He made wise laws to govern the church. He died in the year 604.

"O God, you look upon your people with compassion and rule them with love. Through the intercession of Pope St. Gregory, give wisdom to the leaders of your church that the growth of your people in holiness may be the everlasting joy of our pastors."

St. Anthony was a Portuguese Catholic priest and friar of the Franciscan Order. He was known for his forceful preaching and expert knowledge of scripture. He was the second most quickly canonized saint after Peter of Verona.

He is typically depicted with a book and the Infant Child Jesus, to whom He miraculously appeared, and is commonly referred to today as the 'finder of lost articles'. He is the patron saint of lost things or people.

Cecilia is one of the most fascinating saints. She lived during the Roman Empire and was born to a wealthy Roman family. She converted her husband to Christianity. Because he helped Cecilia in her charity towards the poor he was put to death. Cecilia responded by converting many others to Christianity.

The story of Cecilia's death says that after being struck three times on the neck with a sword, she lived for three days and asked the Pope to convert her home into a church. She is often shown in art with a musical instrument reminding musicians to lift their talents to God. She is the patron saint of musicians.

St. Joseph is regarded as a carpenter and was also the foster father of Jesus. After marrying Mary, Joseph found that she was already pregnant, an angel came to Joseph and told him that the child was the son of God and was conceived by the Holy Spirit.

After Jesus's birth in Bethlehem, an angel came to Joseph again to warn him and Mary about King Herod of Judea. Joseph then fled to Egypt with Mary and Jesus. In Egypt an angel appeared again, telling Joseph that Herod had died and instructing him to return to the Holy Land. Joseph, Mary and Jesus settled in Nazareth, in Galilee.

Though the Bible rarely mentions Joseph after the birth of Jesus, it is believed that Joseph taught Jesus his carpentry skills. It is not known how Joseph died, but it is likely that it was before Jesus's ministry and Crucifixion.

Theresa of Lisieu was a Carmelite nun. She is popularly known as 'The Little Flower of Jesus' because she said she was just like the simply wild flowers in forests and fields, unnoticed by the greater population, yet growing and giving glory to God.

Together with St. Francis of Assisi, she is one of the most popular saints in the history of the Church. St. Theresa loved nature, and often used nature to explain how God is everywhere, and how everything is connected in God's loving care.

The Basilica of Lisieux is the second largest place of pilgrimage in France after Lourdes. She is the patron saint of gardeners.